Stage 1 - well that went quite well

My aim in the Haute Route is to finish and ideally to finish within the time cutoff.  Well that’s one day down J

The day started with breakfast (important) followed by transfer where we drove through the outskirts of Barcelona and I decided I do not ever want to live in those suburbs.  Amazing high density, drab apartment blocks.  Reminded me a bit of Istanbul actually.

But then we passed by Montserrat and I wanted to go there!  Forget the race, it looks amazing!   But we didn’t.  And arrived at Solsona about an hour before the race start. Clambered into my kit and in my usual pre-race panic started trying to fix things I should have fixed before.  Did none of it efficiently.

And then we were lined up for the start and – we’re away! 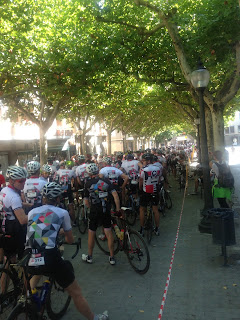 It was a neutral start and we did a couple of laps of town so the locals could properly farewell us, which they did in style.  It was actually really nice.  I started down the back,

As we rolled out of town, Will (from Two Wheel Tours who I’m travelling with) pointed out the sag wagon.  The night before we’d heard that if the sag wagon passed you; that’s it – you’re officially dropped from the stage.  No way was I going in that sag wagon but at least now I recognised what it looked like.  Later in the ride, on the last climb I spotted it behind me.  Even though I knew I was up on time, it still motivated me to pedal faster.

First climb started immediately and seemed to go forever with 3 cols.  It took ages to warm up and get the rhythm of climbing.  But the views!  They were just fantastic.

I took a couple of snaps without getting off the bike, so excuse the quality.  Wasn’t going to let that sag wagon catch me. 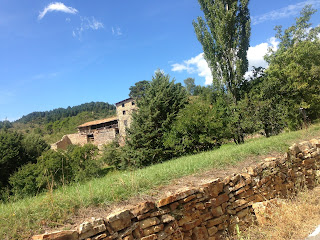 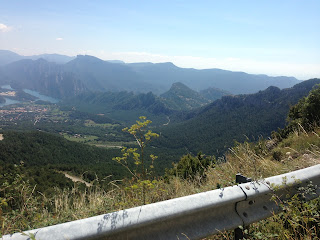 The 4th and last climb was my favourite.  The road climbed up through national park and some farms.  There were cows with bells on!  And then a quick fill of the water bottle and hurtled down the last descent – on a truly rubbish road.  I’ve still not got the hang of tight right-handers (we don’t have them in Australia) and a scary looking deep washed out gully on the right nearly got some close attention from me on a couple of occasions.

I finished in 5 hours and a full hour ahead of cutoff and averaged about 17kph (elapsed time). The race leaders finished in under 3 hours.

We've just had dinner and some of the faster blokes in our group have just discovered 3 women pro-riders have chicked them.  :-)

Fortunately there’s no transfer and we start early.

Everyone is talking about Tourmalet in a couple of days.  "Hard" is what they are saying...